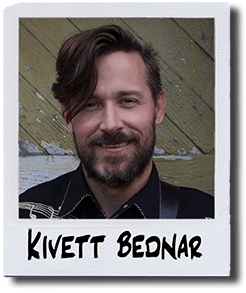 Originally from Austin, Texas, Kivett has made a name for himself in Portland and beyond for his passionate solos, soulful vocals and dynamic onstage presence. Kivett arrived in Portland about six years ago but has been playing blues guitar for decades. A graduate of the Berklee College of Music, Kivett has turned heads in the Portland metro area through his appearances with the Kivett Bednar Band, the Rae Gordon Band, The Pining Hearts and Land of the Living. This versatile guitarist is also an accomplished painter who has had his artwork displayed in various galleries and shows around Portland and Austin; he was named Best Visual Artist in Willamette Weeks 2017 Best of Portland reader poll.